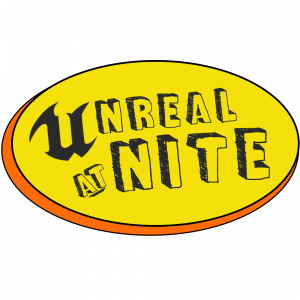 Step into an “unreal” world with this parody of late night, variety talk shows virtually produced in the Unreal game engine.

Inspiration was taken from classic late night talk shows like The Tonight Show, Jimmy Kimmel Live, and even The Eric Andre Show.

Take a look at our concept video for the initial idea of Unreal at Nite, previously called Unreal Times.

The virtual set was created and designed using Unreal, assembled with a mix of custom created and free online assets. The Live action video was recorded and lit inside a green screen studio.

Check out the 360° Tour of the Unreal at Nite studio: Click Here